After my last post, I visited the 3D printing shop, where they were putting on a demonstration for beginners. I showed them a photo of what I was intending to make, and it all looked very straight forward. I went ahead and ordered the FlashForge Creator Pro

Once I got it home, I eagerly set it up (a couple of hours work, as there weren’t any detailed instructions), and went about making my first 3D print. The first few layers looked promising, as the base of a melodica key began forming as if by magic.

But this is where the magic stopped unfortunately. It quickly turned to a plastic mush, forcing me to abort. I wasn’t too concerned, as I had been told that not every print would work. But when I tried again, the machine began shuddering violently, and had to be returned to the shop.

A week later I collected the printer again, having been assured that there was nothing wrong, and continued with my printing attempts. Well, the shuddering had stopped, but still no success with printing out the first melodica key. I tried everything the shop suggested – days of recalibrating the two nozzles, resetting switches, trying different software (I even bought extra software for $140) and endlessly levelling the base plate, to no avail. Here’s one of many failed attempts:

The reality of 3D printing

During the following week, I became intimately acquainted with the working of a consumer 3D printer, and became active on the printing forums, which really opened my eyes about the reality of consumer 3D printing. (FDM) Printers at this price point (under $5,000) are very basic machines, and require regular ‘fixing’. When they do work, they’re not capable of precision modelling at all. Machines that are able to print in 100 micron layers (one tenth of a millimetre), do not actually print to that level of accuracy. So, even if my machine was functioning properly, the quality and accuracy wouldn’t be up to the job.

My printer was returned once again to the shop, where this time, a fault was discovered, requiring new parts to be ordered in. I’ve asked for a refund, as I can see that this is a dead end as far as building melodicas go.

So what next? What about professional 3D printers? Would they be up to the job? I decided to look at two entry level pro models from Stratasys, the (ABS) plastic based Uprint SE, starting at around $16,000, and the resin based Objet 24 at around $20,000. I visited the SYS Systems showroom in Derbyshire, where they printed out some test parts for me to compare – a section of the skeleton, and a couple of keys.

These printers are a world away from what I’d been using, big well built machines with low failure rates and minimum maintenance. The Uprint parts were strong, as they were made out of ABS plastic, but although the skeleton was tough, the keys were flimsy, and could easily be bent. The surface was very rough and small details were completely lost on the keys, meaning any airtight connections were impossible (see the top photo). This is a section of the reed chamber – as well as the grainy finish, there’s a random step: 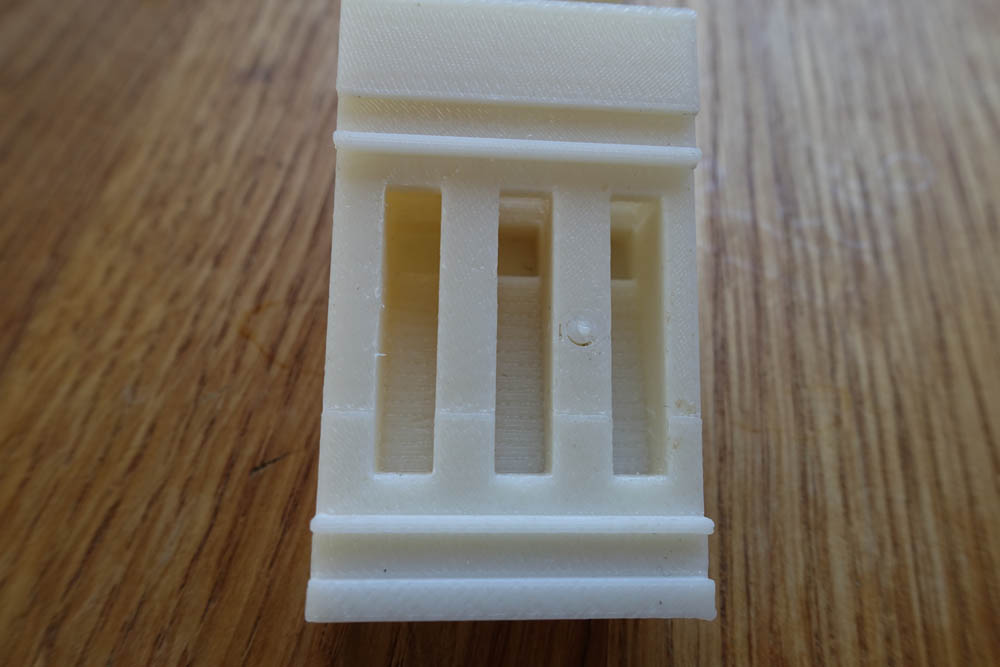 The Objet 24 parts were much more accurate, and the keys less flexible, with the necessary level of detail required for airtightness. But the material isn’t as strong as plastic, and it’s considerably more expensive. Having said that, I do believe the quality is sufficient for printing out a functioning melodica.

I’ve realised that although melodicas are very simple instruments, they need to be manufactured with a high degree of accuracy. They’re made up of multiple moving parts which interface with each other to make airtight connections. A tiny imperfection can have a large effect on many areas – the evenness of a key’s motion, the ability to securely attach the reed plates, or opening and closing the air channels without experiencing leaks.

But at $20,000 for the most basic professional 3D printer (not even big enough to print out the complete skeleton), I’ll be going back to plan A, and using the services of a professional 3D printing company. At least this time, I know which printer and material to specify!

How to hold a melodica

3D Printing a Melodica (2) – The beginnings