These first generation Pianicas are solidly constructed, but disassembly is risky, especially if you have not worked on vintage melodicas. This is especially true of the Pianica 32. If it is reasonably well in tune (as they seem to be) and not in need of repair, it’s best to leave well enough alone. The key springs are likely to come off during reassembly and could be easily lost. This pianica was introduced in 1960 or 61, and it is likely to leak air (or more air) after being taken apart, which does not seem to be a problem with later Yamaha and Suzuki melodicas. 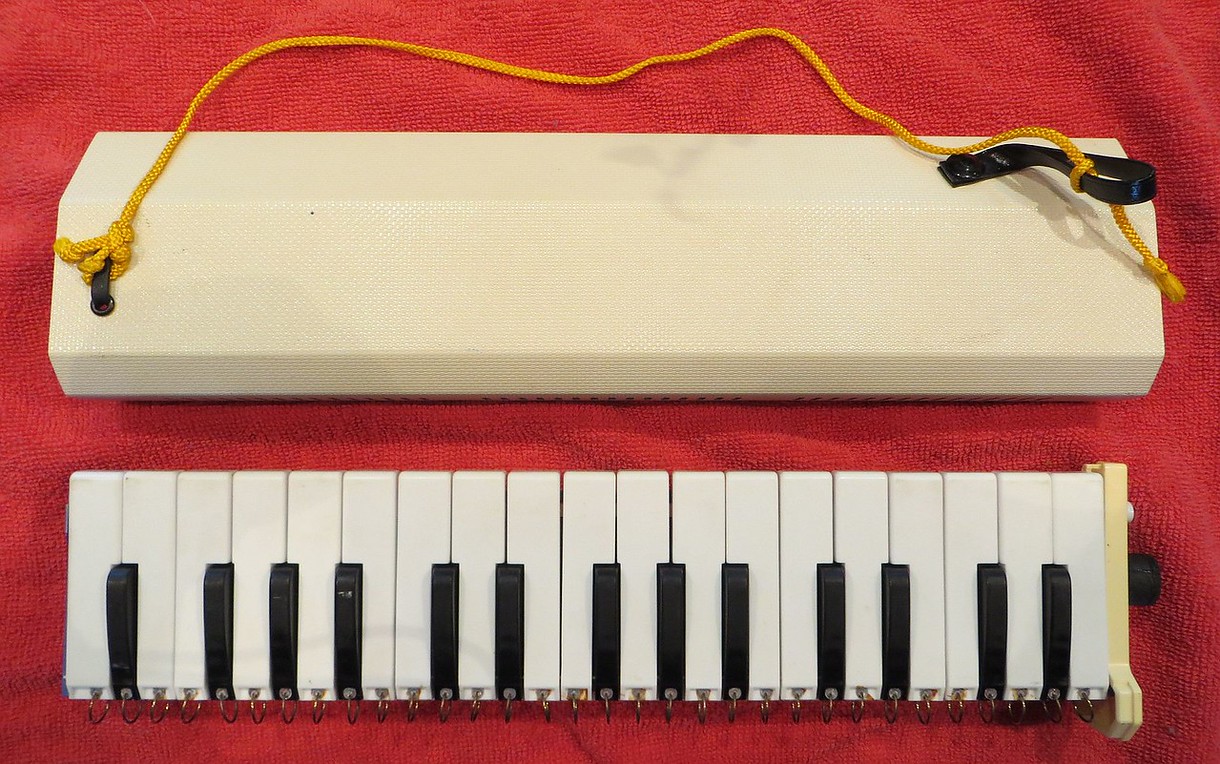 The blow end piece does not have to be removed (and is better left on) during disassembly. Whether you leave it on or figure out how to remove it, this feature complicates disassembly/reassembly. 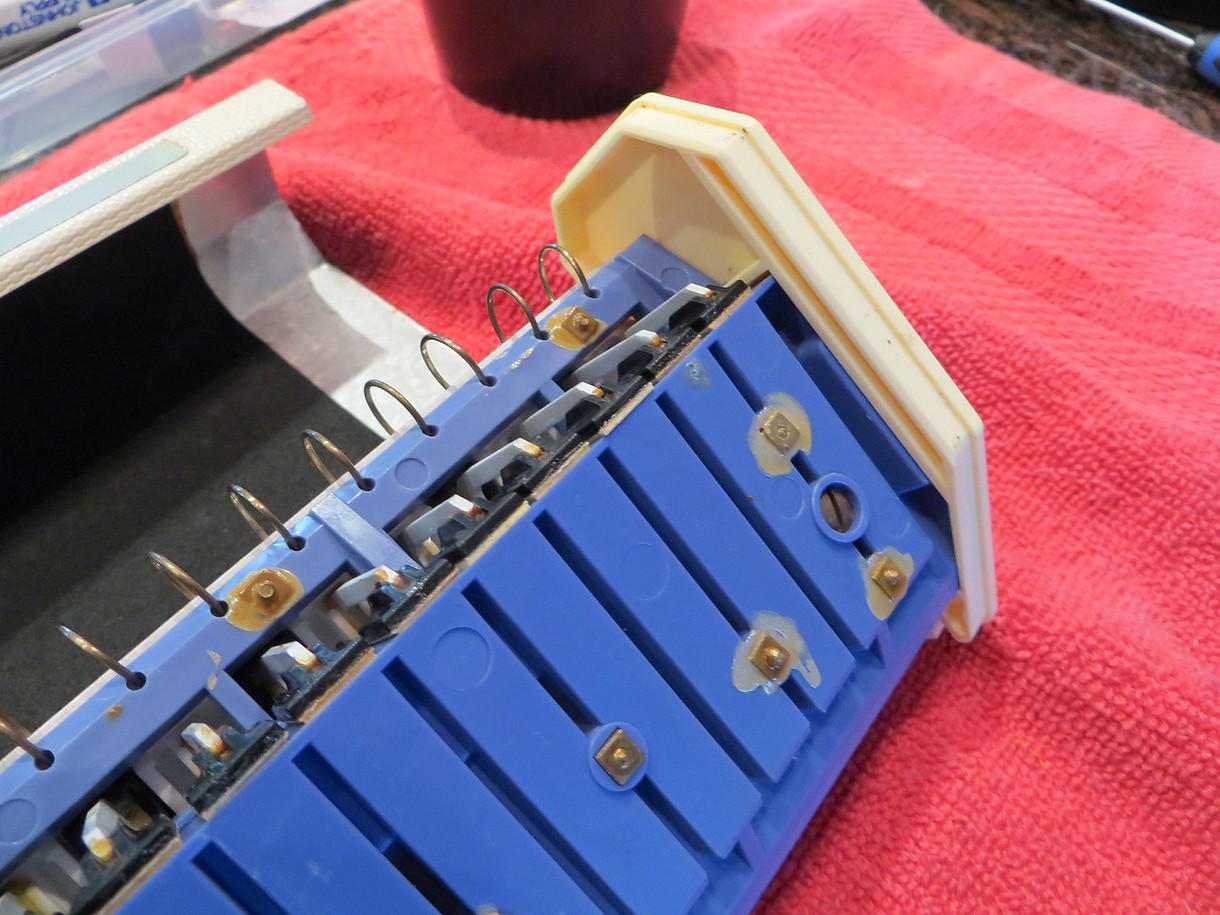 The springs look like the kind of fishing hook that’s called a “circle hook”. They are very easy to remove but difficult to replace. They were not aligned with each other, and it would be almost impossible to get them all parallel during reassembly; but it does not matter. The grooved blue plate has the reeds on the bottom and is the reed air chamber cover. It is screwed on with four large bolts, one of which was missing (which is probably the main reason for leakage). An end screw was also missing.

Here we see the other side of the blue cover after it has been removed, and the inside of the air chamber. The rust colored material is not corrosion; it is some kind of glue or sealant. There is no significant corrosion in this pianica, just a bit on the reed plates.

The key pads look uneven, but this is not a problem, since the air hole edge of the cover keeps them aligned.

This instrument has three reed plates, and they are in good shape, despite some of what the British call discolouration.

Here’s the edge of the reed cover lined up with the key pads. During reassembly, the super blue plate/cover is moved up flush with the key pads and slides into the end piece and snaps down into position. During this process, it’s likely that one or more key springs will dislodge, and the keypad mechanisms are at risk if you’re not careful.

Close-up of key pads and of a key. The pads and air chamber gasket are a fairly hard smooth material, as with the Pianica 25, except that these pads have a slight rise that sits in the air hole. 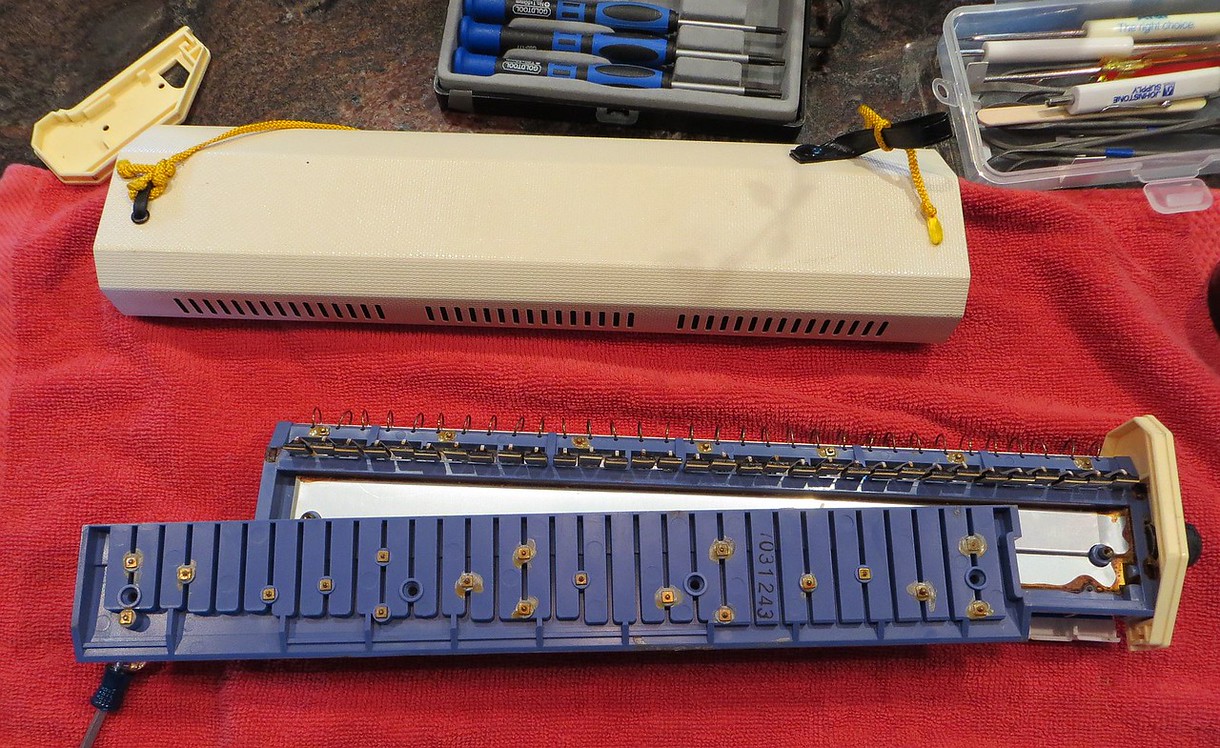 The vents on this Tokai Gakki Pianica 32 are covered inside by a rubbery cloth-like pad. If you try to blow air through them, it can’t be done. My Yamaha Pianica 32 has no such pad, which leads me to suspect that it was added by a resident of the Brooklyn Hebrew Home and Hospital in hopes of muting the sound.